Can you lay turf in Winter – Turf can be laid throughout the year, Turf can even be laid during the winter. In fact, laying turf in winter has its advantages.

When is the best time to lay turf?

Laying turf in winter will still give it enough time to root and settle before spring. One of the benefits is that normally, you won’t need to water newly-laid turf in winter, so it’s easier to maintain. The turf rolls will keep longer in damp, cold conditions before they need to be laid – they can be left for up to three days.

Please note: Turf growers cannot always harvest their product in winter. If the ground is frozen or sodden, the turf could be difficult to handle. Check with your supplier before you start work. 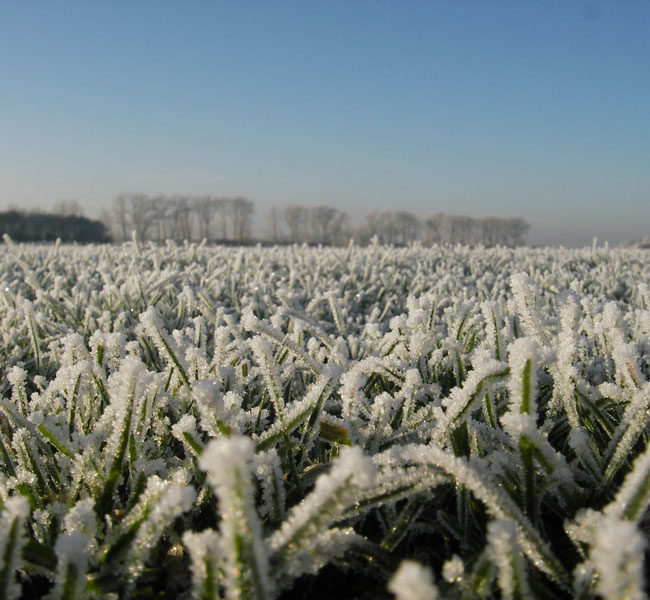 It’s simply not possible to harvest a field of turf when it’s frozen like this. However on mild winter days we can get a lot done. Talk to your turf supplier if you are thinking of laying turf in midwinter and let the weather forecast guide the timing for your project.

Is turf damaged by frost?

Surprisingly, even frost isn’t damaging to the turf. Although it’s not possible to lay turf if the ground’s frozen, once it’s been laid, a sudden frost won’t have a detrimental effect. Even if the turf rolls freeze, they will keep for weeks and can be laid when the frost has thawed.

When laying turf in Scotland – which can be prone to cold spells and frost – if you’ve ordered shortly before a freeze, Stewarts Turf will postpone your order, as long as it hasn’t been harvested or dispatched, until the weather’s more suitable.

How to lay turf

First, work out how much turf you’ll need…

How to measure the lawn area

First, work out the lawn area in square metres. It’s easier to draw a sketch first to calculate accurate measurements, showing the length and width of the area to be turfed and any unusual features. It’s preferable to add at least 5% extra turf – it’s better to have too much than too little. All our turf at Stewarts Turf is harvested in square metre rolls, which are measured electronically and cut by a harvester, achieving 100% accuracy.

Use our helpful turf calculator

Preparing the ground for turf 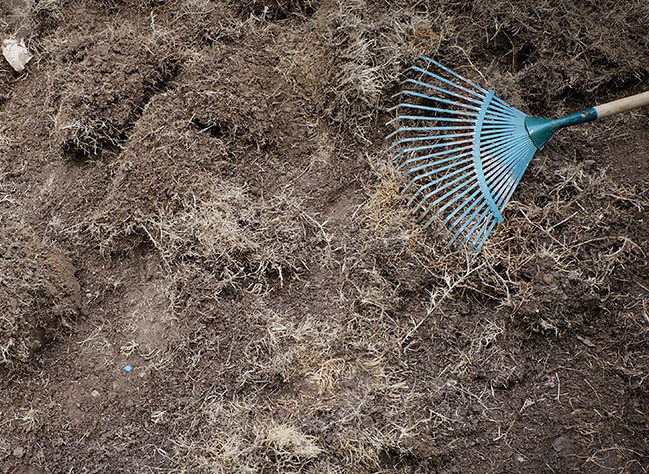 Making sure the ground isn’t saturated, dig the area over using a fork, or mechanically rotovate it, removing any large stones, bricks or tree roots. Ideally, leave the ground for a week to settle before laying the turf.

Before starting to turf, hoe out any weeds and then rake the soil until it’s level.

If you’re using turf compost or screened top soil, rake this out until it’s level.

Walk up and down the area before turfing – known as “treading in” – to firm the surface. Don’t cause compaction.

If the soil is wet, keep off it till it dries out a little. Rake it in different directions to achieve a flat finish.

If required, apply an organic or pre-turfing fertiliser at this stage by raking it lightly into the surface.

How to lay turf

After the first row is laid, work off boards or planks as footprints in the soil underneath can cause an uneven finish.

Lay the rolls a little beyond the final shape, as the turf can be trimmed back after completion.

It’s important to lay each turf roll as straight as possible, ensuring the inner end – which can curl up – is rolled out flat. Then, ensure all the turf ends are butted together firmly.

The joins must be staggered brickwork-style, ensuring no gaps appear between the turf.

Never walk on newly-laid turf, waiting instead until the roots have bedded in.

Get a quote and buy turf online