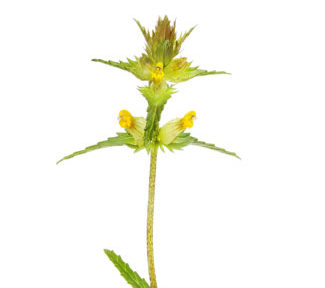 In days of yore, yellow rattle (aka hay rattle) was no friend to the farmer. Farmers who were nurturing meadows as a means to feed their beasts were never pleased to be invaded by this pretty little plant. It can actually supress grass. For those of us who are growing ornamental wildflower meadows or wildflower turf, yellow rattle is an enormous help.

What Is Yellow Rattle?

Yellow Rattle (Rhinanthus minor) is an annual plant that likes to grow in grassy meadows. It is semi-parasitic on grass.  What that means is the yellow rattle roots attach to grass roots and draw nutrients from them. The grass is weakened by it – which is why wildflower meadow makers love it and farmers hate it.

This plant grows to around 30cm high and is an annual. So it will flower once and then die.

The seeds must be sown in autumn because they need winter frost to stimulate germination. They will germinate in March, flower in June and set seed in July.

The flowers are yellow and quite subtle – they don’t create a huge splash of colour – not by any means.

The seedpods though are quite distinctive, when the wind blows or if you shake the plants, the seeds rattle in the pods and make quite a noise. Hence the common name of yellow rattle or hay rattle.

This is one of the trickier wild flowers to introduce into a meadow. Be prepared to make fresh sowings every year (you can gather seeds from your own plants each year).

Yellow rattle seed harvested from my own garden.  I shall need to separate the seeds from the pods and the stems before I can sow it.  If you don’t have yellow rattle in your garden at the moment – you can buy the seed online (see link below)

You’ll be planting yellow rattle to suppress grasses. However you need to bear in mind that each seed wants to grow into a plant – and that plant will need air, water, soil, light and room to grow. So simply sprinkling the seeds onto an area of thick grass won’t work. The plants will be unable to develop.

You need to choose an area where the grass is already slightly weaker in order to get these little plants to grow. Or, you could weed out some of the grass plants and sow yellow rattle in the spaces.

Always sow yellow rattle seed when it is fresh – old seed will not grow. And always sow in autumn/winter.

Be persistent. If the grass is particularly robust, it may take more than one season for the yellow rattle to sort it out and allow more wild flowers to germinate.

This passage is from Pam Lewis’ book “Making A Wildflower Meadow”. I think you’ll find it helpful – if you like it, buy the book. It’s excellent!

Yellow rattle – a friend and ally

For centuries our surrounding Blackmore Vale has been dairy farming country, where the fertile, gently undulating land produces lush grass.  I had to work hard to persuade the lusty vigour of this grass to abate.  The regular removal of the grass crop has been the key to success but I have also had the pretty little annual yellow rattle on my side.  I have one particular patch where the rattle is now abundant, the grass sward is correspondingly thin, and wild flowers are particularly prolific as a result.

has been manipulated but it has taken some perseverance to nudge the system into operation.  In the beginning I sowed rattle seed with disappointing results.  I hadn’t grasped the fact that although this plant is semi-parasitic and feeds off grasses, the rattle seedlings need sufficient space to germinate and develop in the first place.  Just as with any other infant plant, it cannot easily gain a threshold where the grass sward is very dense.  I did, however, have a little success from my attempts, saved seed from my small crop and persisted with rattle seed distribution in different parts of the field.

One year I noticed a thin ribbon of rattle growing in profusion along the length of a disused fox (or badger) track.  It had found and ideal opportunity to germinate on the barer ground that had been carved out of a vigorous jungle of grass.  I made use of this intelligence and, with a bountiful harvest of seed at hand, I set out to mimic the work of the fox.  Bearing in mind that rattle seed is only viable for a few months, I started my campaign in late autumn when the lush aftermath obligingly mapped out places where the grass was most vigorous.  Instead of choosing the greenest places, as I would previously have done, I set to work on the less fertile patches.  I bullied the grasses and suppressed the growth in the same way that the fox had done with the wear and tear of regular passage.

During the winter I dug up some of the grasses and shuffled tracks here and there.  As I progressed, I sowed most of the seed during autumn and early winter.  In March we mowed a few more tracks and sowed the remaining seed.  In April the seed miraculously began to germinate in the places we had targeted.  The result was extraordinarily successful but we had to keep working on it for a few seasons before we could rely on its reappearance.  Form this nucleus ‘rattle nursery’, I have harvested dynasties of seed to spread not only across our own meadows but also in several other grassland projects.

Buy the book “Making A Wildflower Meadow” by Pam Lewis