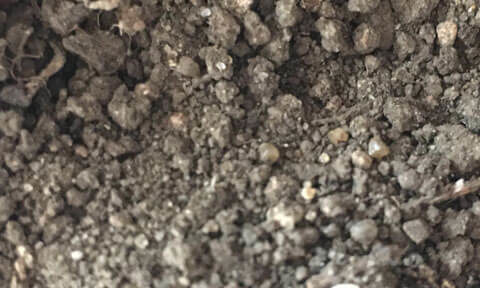 Topsoil is the very uppermost layer of the earth’s crust.  It’s only about 30cm deep – sometimes less – but it’s a pretty important part of the life-force for our whole planet.

Air, sunshine, water and soil; these four things are what allow us to eat, breath and survive.

Topsoil is a mixture of tiny rock particles, silt (from ancient ponds and rivers) and organic matter in various stages of being broken down.  It also contains air, water and billions of microscopic plants and animals. Its an amazing substance.

Depending on the type of bedrock and the plants that have been broken down and added to the mix, soil can have different textures, different nutrient availability and different handling properties.

The word “soil” is like the word “car” – there are so many different variations on a theme that it doesn’t bear thinking about.

How Is Topsoil Made?

Topsoil is formed when rocks are broken down – eroded – by weather.  Frost, the action of water, and even hundreds of years of being walked on, gradually breaks the rock into smaller and smaller particles.

Leaves, moss, animal poo and other detritus rots down and adds to the rock particles and bingo! You have topsoil.

This soil is mainly made up of organic matter – in other soils you may see grains of sand, silt and stones.  It all depends on where the soil comes from and how it has been managed over the centuries.

Be careful with it though – apparently it takes 100 years to make 2cm of topsoil.  So to make enough topsoil to grow a lawn, would take 750 years. Crikey – all of a sudden it doesn’t seem so expensive.

How Is Topsoil Harvested?

Different types of soil are harvested in different ways.  Some is dug up from building sites or from farms.   Some is made by composting green waste.

At Turfonline, some of the topsoil we offer is a by-product of farming.  It’s been reclaimed from the water used to wash vegetables before they’re sent to the food processing and packaging factories.

We screen out any big stones and bits of root, peel and leaves then pop it into big bags and store it under cover until somebody needs it.

Blended topsoil – like our Low Nutrient Soil for Wildflowers – is made by taking two or three different soils, composts or aggregates and mixing them together to get the best growing medium for specific plants.