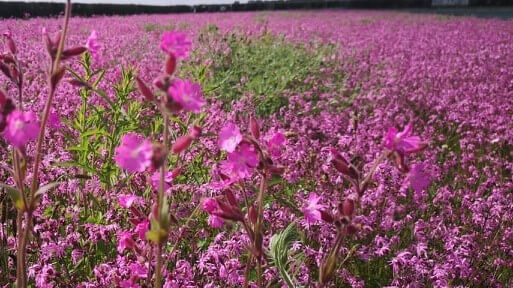 The Society of Garden Designers have selected Meadowmat for Birds and Bees as a finalist for their Product of the Year Award.

Members of the SGD voted for the products that they felt were the most worthy contenders  for the overall title. All ten of the shortlisted products will be displayed at The Landscape Show in Battersea Park from 23rd-24th September 2014. Garden Designers visiting the show will be asked to vote for their favourite product. The product with the most votes will be revealed at the show on 24th September.

Meadowmat for Birds and Bees was launched early in 2014 and the first batch sold out very quickly. Consisting of over 40 native species of grasses and flowering plants, Meadowmat is a pre-grown wildflower meadow on a roll. It’s laid just like turf and is very quick to establish.

The advantage of using wild flower matting rather than wild flower seed is that any annual weed seeds in the soil will be suppressed. It’s also much quicker and delivers speedy results.

What Is Meadowmat For Birds And Bees?

“By reducing the proportion of grasses in the seed mix the final product is more appealing to the gardener” explains Angela.

“The mix of flowering species is unique to Meadowmat for Birds and Bees. It’s designed so the product will have a longer flowering period than most of the wildflower mats offered at the moment. It’s important as a food source for bumble bees from early Spring, right through until the first frosts. Meadowmat Birds and Bees does a good job of providing pollen and nectar in the months that bumblebees are flying.” Angela goes on to say “We’ve used some plants with beautiful seed-heads. Birds love them as a food source during the autumn and winter.”

What species are in the seed mix for Birds And Bees?

You’ll find a full list of species as well as the features and benefits of Meadowmat for Birds and Bees on this website.

More information about Meadowmat for Birds and Bees

About the SGD Product of the Year Awards