Why I like to use bark to create all-weather paths and surfaces in my ever-changing garden.

Anyone who knows me well will know that my garden changes on a regular basis.  I’ve lived in the same place for over 30 years. In that time the garden has been through phases based on the needs of the family.  In 3 decades we’ve had periods with no children; small children; children and dogs; no job; full time job; part time job; freelance; teenagers; grandchildren; chickens; bees…….life changes and that’s reflected in my outdoor space.

Currently, I have a bee-friendly wildflower patch, a chicken run, a polytunnel and raised beds, shrubberies, flower borders, lawn, patio and a small pond. As well as 3 dogs, 3 grandchildren and a bad neck.

Some of the flower borders are about to be returned to lawn.  Looking after grandchildren, training my puppy, working and getting older mean that I don’t have the time or energy to maintain them.

Why I chose bark to surround my veg beds

Possibly, in time, the raised beds will go.  That’s one of the reasons, when my Son and I built the raised beds, we didn’t surround them with hard landscaping.

1.  It would have cost a fortune and

2. It would change the soil beneath it forever.

Instead of hard landscaping, we opted for a thick layer of bark.

Bark mulch is great.  It makes an all-weather surface.  The chickens love rummaging about in it (they get let loose in the veg patch over the winter when they can’t damage it).  The children love loading it into toy tractors and trailers.  I like the way it looks AND I know that can easily be changed if and when I alter the garden again. 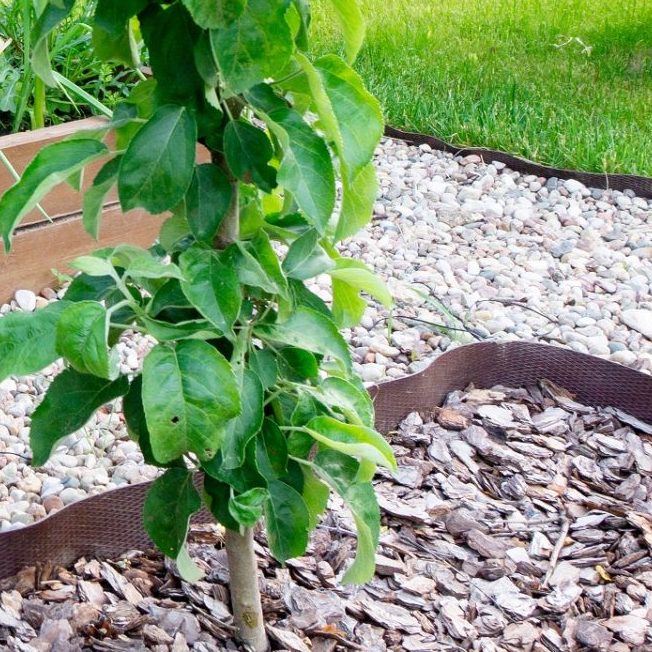 It’s also easier to wheel my barrow on than gravel.  I can whizz over it with a herbicide if it gets too weedy – although that hasn’t happened so far – and its easily refreshed by a quick rake over.

Bark gives  a natural look and feel to outdoor space

In fact, I like bark paths so much, I’ve used it in my elderly parents’ new garden too.

In their garden I asked a landscaper to build some high raised beds – so that Mum can sit on them while she furtles around with her plants.  He’s also put in paved paths – in case we ever need to use zimmer frames etc out of doors.  But between the paths and the raised beds there is a border of woodchip mulch.  It absorbs rain a lot more naturally that the paths and it just makes the whole garden look more natural and less like concrete.

The leftover bark (we bought it in big bags) was used to mulch their two small flower beds.  Lovely!

Get prices for bulk bags of bark mulch